How To Write Sex Scenes

Before we jump into how you write a good sex scene, let's first talk about the different ways that sex can be written in books.

LET'S BREAK IT ALL DOWN!

Now, when it comes to being super detailed and/or graphic while writing sex scenes, for one thing, the author doesn't normally shy away from calling body parts exactly what they are: a dick, a cock, a pussy, nipples, etc. instead of choosing safer works like shaft, member, etc.

I'd like to say that this style is all about the details and descriptions.

Some authors will go all out and will literally break down the sex that's happening; for example, she watched as he lowered his head and settled in between her legs, and then she felt it, the flick of his tongue against her... You get the picture lol and the whole scene will go like that which is fine for some people, but SOMETIMES those types of super detailed scenes can be emotionless and flat.

Long story short, this style of writing focuses more on what's going on vs how the characters are handling things mentally and emotionally.

For obvious reasons (underage users!!), Wattpad and most sites similar aren't too welcoming when it comes to 'smut' or hardcore erotica, but if your book is telling an actual story and has a plot, then you should be safe even when writing detailed/explicit sex...

Just to give you a better explanation of what's allowed on Wattpad, per their rules: 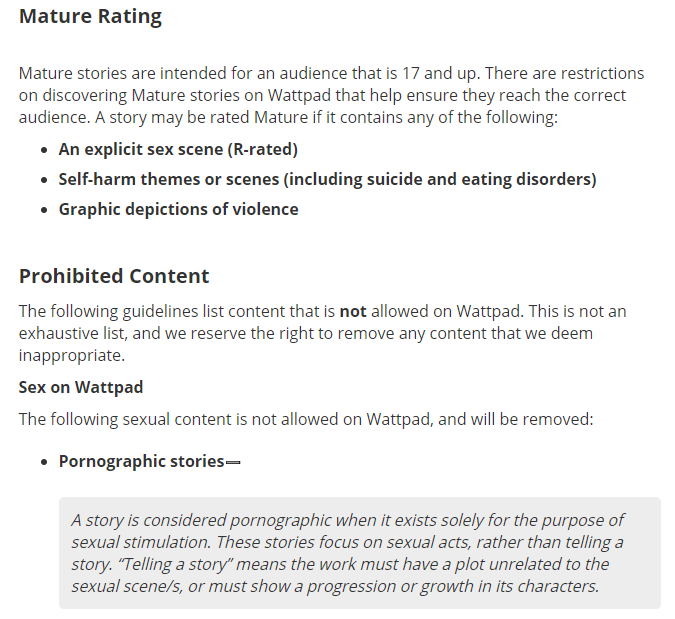 This form of writing typically looks something like: 'he grips my hips and enters me gently from behind, moving inside me with slow, easy strokes until I eventually hit my peak and fall apart all around him...' -- and boom, there's the whole sex scene told in literally just a few sentences.

Don't get me wrong, this writing style can still be hot - no matter the length - even without the use of explicit words and things of that sort. And the last thing to note, with the 'cleaner' sex scenes, they tend to be more focused on the emotions of the characters vs the actions of what they're doing.

All in all, it doesn't matter if you write one way or the other.

What matters is if you come across a point in your story where you feel like a sex scene is needed, but you have no idea about how to start it or even write it...

When it comes to the point of where you feel the need to add sex in your story, you have to ask yourself - am I even comfortable writing something like this?

If you answer NO to that questions then DO NOT try to force yourself to create a sex scene for your book.

Readers, most of them, WILL be able to tell if something doesn't look/sound right and some might even call you out on it, so don't take it the wrong way and be sensitive if one of your readers corrects you in stating that, for example, water isn't a good lubricant - there goes a freebie for all my folks interested in writing sex scenes in the shower lol

Also don't be ashamed if you're inexperienced with sex but are trying to write a sex scene because believe it or not, it's possible to do.

For those that want to have a sex scene in their book but aren't capable of actually writing it because you don't know how/where to start, my personal advice to you is to just skip it.

You can lead up to the point of your characters getting ready to have sex, and when it comes down to Tom taking off Sally's pants, you can lightly end the chapter with a good cliffhanger and have them waking up in bed the next morning/chapter kissing and cuddled up, maybe even talking about how their night went.

*this can be considered a fade to black scene, like how they do in the movies*

Yes, the horndog readers will be salty that there wasn't any sex, but the rest of your readers probably won't even care because, at the end of the day, it's not always about fucking when it comes to romance or whatever else you're writing. Sometimes it's best to just stick to bases 1-3 and keep it moving with the plot lol

I wasn't going to include this next part, but I figured why not...

I'll try my best to help guide you through writing about sex... however, everyone is different and ultimately, you're going to have write the actual scene out for yourself because I can't do it for you lol

& with that being said, let's jump right into it!

I like to have my sex scenes be a little dirty but also soft and romantic.

By that, I mean I use the graphic words like cock/pussy, etc. (never do it excessively) but I also go the safe route and use 'shaft' blahblah, things like that, occasionally cleaning things up so it's not straight up smut city lol

When the sexual tension has been building for chapters upon chapters between your two main characters, obviously things are going to be emotional for them while they're having sex for the first time.

When you're doing a scene like this, pay attention to where the sex scene is. Include info. about the five senses (taste, touch, smell, hearing, sight). NEVER focus only on the sex, because at the end of the day, they're people too. They have feelings and thoughts, so let that be expressed while you're ALSO incorporating sex into the scene.

Tom's heart was racing a thousand miles per minute as he helped Sally get undressed, his trembling hands being ever so gentle as he peeled her out of her clothes. Sally was truly a work of art, and Tom felt like the luckiest guy in the world because she was all his. He loved everything about her, loved every inch of her curvaceous body. She was stunning...

Cupping her full breasts, he gently teased her already stiff nipples, pinching and twisting, his eyes drinking in the way Sally's face contorts with pleasure, her moans filling their bedroom with the most beautiful song he's ever heard...

Even if you're a virgin and don't know all that much about sex or what a penis feels like, etc, it doesn't mean that you can't fake it until you make it.

Sometimes you have to go out and do your own damn research.

ALSO REMEMBER THESE WHAT NOT TO DO/WHAT TO DO TIPS FOR WRITING ABOUT SEX:

I'm sure there's more that I can add to this, but for now, you should get the gist of it all: be detailed but don't only focus on the sexual acts, have emotions in the scene, and actually know how the body works when aroused... from there, creating the rest of your sex scene is up to you.

Know Your Worth & STOP Working For Free 👀

How To Properly Tag Your Story On Wattpad

Your Word Count Is Important